Vrindavan takes its name literally from “forest of Tulsi” or the Holy Basil (Ocimum tenuiflorum). Two groves of these Tulsi herbs can still be seen in Sewa Kunj and Nidhivan both of which are situated near the city and were the favorite sites for Radha and Krishna as well as the Gopis for conducting their ‘dance of devout passion’ or ‘Raas Lila’. 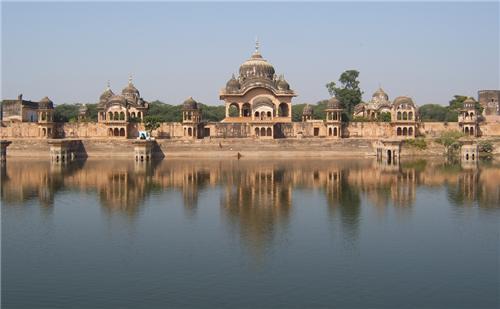 Vrindavan is a city of temples and ashrams where devotees of Lord Krishna have built, extended or contributed towards increasing the creature comforts for the devotees thronging to the divine pilgrimage site. The city virtually reverberates with the resounding chants of ‘Radhe Krishna’ during the morning and evening hours when six ‘pujas’ or ‘aartis’ are performed and the ‘prasad’ or ‘bhog’ is also distributed. 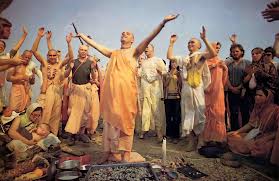 The divine love of Radha and Krishna, the mischievous antics of the naughty, youthful Krishna and the cow herd maidens or Gopis, the gentle care of the Gokul chieftain, Nand and his wife Yashodha’s great love for her foster child Krishna as was his love for his elder brother, Balram – all are the substance of myths, rituals, traditions, events and festivals that make Vrindavan such a sought after tourist attraction.

Centre of Culture and Learning

Vrindavan is the prominent centre for the dance form, ‘Raas Lila’ or the dance of divine devotion along with Rasiya songs forming the backdrop to the dances where the girls carry lamps on their heads and swing through various formations to the tune of myriad musical instruments.

The great music festival, ‘Swami Haridas Sammelan’ is organized in the memory of Swami Haridas. He was the Guru of the great singing maestro, Tansen. Tansen was one of the nine talented gems in the court of King Akbar. Thus, Vrindavan has unique distinction of being a seat of learning and cultural expansion of the mind and spirit both.

Spread along the banks of the Yamuna River, Vrindavan is located just 12km to the north west of the other Brij dham, the holy land of Mathura. Geographically lying between 27.33 N and 77.41 E latitudes, Vrindavan, virtually is the heart of the sacred sphere of Brij also called the ‘Braj Mandal’. It is a plains area enjoying a well-wooded topography efficiently watered with the Yamuna rivers bounty.

Click Here to read more about Geography in Vrindavan

Winter: October to February when pleasant outdoor activities can be planned with temperatures ranging from 140C – 320C.
Summer: March to June is very hot in the day with temperatures upto 450c. Even nights are very hot. There is eminent danger of getting sunstroke during these days.
Monsoon: July to September Vrindavan is green and radiant during the rains.

Vrindavan the City of Temples and Piety 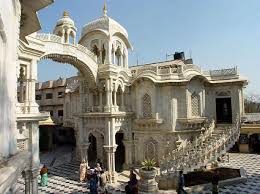 The ISKCON movement or the international movement for Krishna consciousness has carried the devotion of Krishna to a totally new plane. Some of the temples that have claimed the legacy of Krishna devotion to the present belong to this organisation. Among them the Krishna Balaram Temple by far has the most beautiful facade. To one side of this temple is constructed the fabulous white marble edifice built in the memory of the founder of the ISKCON movement. The deities of Krishna, Radha and Balram adorn the sancto sanctorum of the temple.

More than a hundred temples belonging to various ages of antiquity can be seen spread along the banks of the Yamuna. The various ghats or bathing spots and points of entry into the Yamuna River are crowded by a colorful variety of mendicants, sages, peers and common people who seek succor from the strife of everyday living. The magical sounds and sights of Vrindavan are enough to satiate the most parched souls.

The singular, most amazing aspect of Vrindavan is its resplendent and breathtaking mystical temples. Some of the most famous and most visited temples of Vrindavan are described as follows:

The Govinda Dev Temple dates back to 1590. It is the oldest among all the temples seen at Vrindavan. The temple has an amazing history. It is believed that it was miraculously discovered by Chaitanya Mahaprabhu during one of his spiritual trances. Another interesting feature of the temple is that the chief deity of Lord Madan Gopal was clandestinely smuggled away to Rajasthan to prevent its being destroyed during the reign of Aurangzeb who was on a war footing to destroy all temples. This original image was hidden away in the Kerali Shrine of Rajasthan to keep it safe. Almost a century later it was re- enshrined in its own place with great pomp and show.

The Madan Mohan Temple is one of the oldest temples of Vrindavan. It was built by Kapur Das of Multan (presently in Pakistan) province. It is situated near the Kali Ghat. The main idol of Lord Krishna was installed here by Shri Bajranbh. He was one of the grandsons of Lord Krishna. The temple was constructed to honor his spiritual guide or Guru, Shri Gargachary.

Garud Govind Temple - This temple is located in Chhatikara village. According to the ancient texts of the Hindus, the Puranas, this temple is probably one of the rarest temples of Garudji. It is the only site for conducting the powerful Kalsarp Anushthan’, or the spiritual solution for a peculiar astronomical placement of the stars in one’s horoscope that is contraindicative to happiness all through life if it is not taken care of.

Banke Bihari Temple - the idol of Bihari, enshrined here was discovered one day by Swami Haridas. He was a devout Krishna ‘bhakt’ or devotee and belonged to the ‘Nimarka sampradaya’ or group of Krishna worshippers. This Banke Bihari image had been recovered by him from the Nidhivan or the forest near Vrindavan (one of the favorite haunts of Radha and Krishna as well as the Gopis for their ‘Raas’ or dance of passionate devotion). It is believed widely that the image or central idol of Banke Bihari is the most beautiful form of Lord Krishna. This temple is one of the most popular temples of Vrindavan.

Sri Radha Ramana Temple - It is among the most beautiful, awe inspiring and revered temples of Vrindavan. This temple houses the original ‘saligram’ or rock cut deity of ‘Radha Ramana’ or Lord Krishna along with his ‘Radharani’. This temple is one of the oldest as it was constructed around 1542 and was initiated at the request of one Gopal Bhatt of the Goswami’s. This is also probably the reason why this particular temple is visited by the greatest numbers of Goswamis and they have constantly shown the greatest devotion towards this Sri Radha Ramana temple.

Ranga ji Temple - it is among the more recently constructed of Vishnu temples in Vrindavan. Raised in 1851 the temple has the unique feature of depicting Lord Ranganath or Lord Vishnu or Rangaji as he is addressed by his devotees, resting in the unique ‘Seshashayi’ pose. Here he is shown lying reclined upon his bed fashioned from the coils of the snake god ‘Seshnag’ or the massive serpent who is holding his multi-headed hood above the lord like an umbrella.

Sri Radha Ras Bihari Ashta Sakhi Temple - This temple is an essential part of the ’84 kosh Vraj circumambulation or Parikrama’. It is a very necessary part of the pilgrimage to the region of Vrindavan and Mathura collectively called ‘Vraj’ or ‘Vraj Dham’. This particular temple is the demarcated site of the divine passion of the Lord Krishna dn his Radha besides her eight friends and companions or ‘Sakhis’. Many a devotee has heard the sound of her anklets on any given full moon night or ‘Purnima’. It is believed by devotees that Radha is entranced by the music of the Lords flute and is dancing away in their ‘Raas Lila’.

Vrindavan the City of Charity to Destitute Women

Vrindavan over the years has come to be called the city of Widows or Destitute women. This trend probably started a long time ago because widows were looked down upon as harbingers of misery and unhappiness and many a times were abandoned by their families. Often these women travelled to Vrindavan and found succor in some or the other of the hundreds of ashrams there. Presently there are more than 20,000 such women in the city.

There are a number of NGOs working for the welfare of these women and they try to accrue to them some of the benefits that are announced from time to time by the government or private donors and institutions.

Normally these women go from temple to temple singing devotional songs or ‘bhajans’ for which they are paid as less as Rs 10/- each and given a frugal meal.

After having a round of the famous temples and attending the pujas it is necessary to look around for souvenirs to take home and to commemorate the visit. The best place is on the banks of the Yamuna itself. Here one may go in for some boating and look around. The ghats and the Loi Bazar present a vast array of curios; one can pick up from seeds and beads to brassware and wooden handicrafts. The streets are full of beautiful workmanship and the tourists may have their fill of curious to pick up for their friends from the wares on display.

Places to Stay in Vrindavan

There is a large variety of budget places to choose from for staying while visiting the holy city of Vrindavan. The best places with all the modern comforts and amenities can be had for around Rs 3000/- per day per room. In contrast dormitory accommodation is also available for a very small sum. Following is a list of some of the popular resting places all of which are within ten minutes walk of the ISKCON temple which is a recognizable landmark of the city.

MVT and Agrasen – both cater to NRIs and are very high end with a tariff upwards of Rs 2000/- per day per room.

Dhanuka Ashram and ISKON Guest house - both of these are also very comfortable and can cost between Rs 2000/- to Rs 3000/- per day per room.

Maheshwari Ashram, Chitrakoot, and Chintamani Kunj – All three sites are comfortable and clean and have requisite facilities. The tariff ranges between 1000/- to Rs 2000/- per day per room.

Comments / Discussion Board - About Vrindavan