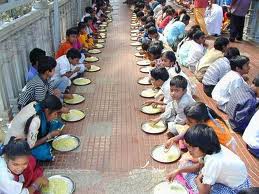 Lord Krishna had given an Akshay Patra or unending vessel of food to Draupadi the Pandavas queen to help them through their tough exile years when they were to live incognito in the tough terrain away from their beloved capital of Hastinapur. It is seemingly that very Akshay Patra that had been reincarnated in this programme for the provision of hot meals at various schools of Vrindavan.

More than 1,60,000 children stream out of their classed at 1.00 pm when it is time for their mid-day meal when they know they would be served piping hot delicious yet high nutritive value food for their mid-day meal. Long before the children reached their classes thousands of hands were busy preparing the many food items that were to go into their meal including vegetables, lentils, rice and thousands upon thousands of chapatis besides curds and other condiments. The delicious flavors wafting out of the geodesic architectural wonder built in the very heart of Vrindavan are an indication everyday of the several souls that will have a good meal that day and will be able to keep the hunger wolves at bay yet another triumphant day. It is a mechanical feat that 40,000 rotis are cooked at one time in the machines provided and oil sprinklers coat the rotis with ghee and oil when required.

The innovative concept was formed to keep children off the streets and in schools to ensure that they learnt the basics while were protected from exploitation as child labor. Many of the children were helping their parents and kin in earning meager earning so that they could put food on their own plates. However, Akshay Patra changed all that. The children go to school every day get hot nutritious food to last them the day and they also obtain an education that would help them become better and more responsible citizens of the nation. 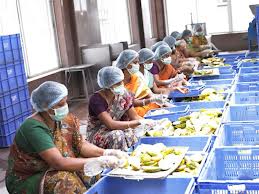 Akshay Patra Foundation is serving one and a half million school children through its mid day meals scheme to bring children back to school and decimate the vast drop-out rates in various states. The foundation is operational in nine states across 13 locations. They provide hot meals to thousands of schools simultaneously. They operate with state-of-art equipment, highly-skilled staff and nutritionists who see to the food needs of growing children to enable them to have healthy food to the maximum capacity they can eat at any one given seating. Once the children know that they will get the same hot meal on time every single day they are confident enough to take their school work seriously and know for sure they will be well cared for so long as they within the school system International Recognition

The Akshay Patra Programme has chapters in UK and in the Unites States of America. The Harvard business school has conducted a case study on the precisely maintained time management system of the mid-day meal provision programme in 2007. The World Economic Forum invited the Akshay Patra Programme to share their experiences and contributing their inputs to ameliorating the Hunger Project in Africa. To cap their achievements the US Hunger programme has awarded an international Fellowship to the Akshay Patra Programme which had been chosen from among thirty five other eminent social welfare programmes of the world level. Thus, the success and sustainability of the Akshay Patra has a lot to say for it as it has won laurels for itself in India and aboard and continues on its mission to satiate hunger and impart education at the same time.

Not only does the Akshay Patra concentrate its energies on the provision of mid day meals to school children it also takes considerable pains to delivery nutrition to expectant and lactating mothers; providing a subsidized lunch to the economically weaker sections besides taking care to provide meals to special schools or schools do have differently-abled children. The programme also sets up feeding sites for runaway children, maintain food provision for old age homes and also set up regular food distribution centres for the homeless so that no may have to sleep hungry within the vicinity of the Akshay Patra.

Other Welfare Programmes by Akshay Patra

The Akshay Patra Foundation takes up a number of other philanthropic activities along with the good Samaritan service it is already doing by giving hot nutritious food to the needy and especially to the school children. Some of the activities they are regularly organizing are health camps, community health check up camps; life skills camps; after class tutorials for the deserving and the needy students besides the provision of scholarship programmes for those who aspire for higher education. Thus, the Akshay Patra is a vessel for the provision of a number of necessary doles for the poor and the needy and they had done exemplary service in the field of meals provision on time every single day for expectant young scholars in the hundreds of schools of Vrindavan.