While ‘Braj bhasha’ or the language of ‘braj’ or Vrindavan is the indigenous language spoken here, the most commonly used language here is Hindi while other languages like Hindustani, Urdu and sundry local dialects of ‘Khadi boli’ or plain spoken Hindi language exist in these parts. People are habituated to speaking politely in Hindi which is typical of the entire Uttar Pradesh belt but is more so in this region. Vrindavan has deeply rooted traditions of music. Exponents of music have been the cynosure of all eyes and musical buffs since centuries. Swami Haridas, the highly gifted guru of eclectic Tansen who was considered as one of the nine gems that adorned the courts of Akbar the great Mughal emperor also practiced his strains on the banks of River Yamuna. In 1964, an annual musical festival was initiated in the memory of Swami Hridas by the great and most eminent musician Swami D.R. Parvatikar Veena Maharaj, the doyen of Veena expertise in the world. This annual event has become a most coveted and sought after feast of music and dance in the international circuits.

The two-day festival is denoted as the ‘Swami Haridas Sangeet evam Nritya Samaroh’ or the Festival of music and dance held to commemorate the birth anniversary of Swami Harisasad. It is one of the oldest international festivals of the country and held with great aplomb and gaiety. This festival is held in the first week of September usually and its equivalent events are also conducted in Delhi and Mumbai. Musical and dance troupes throng to the holy city as they are sure of a performance before audience that is highly appreciative of their particular form of performance. The great leading lights like Uma Sharma, Guru Kelucharan Maharaj, Sushil Bawecha, Pandit Vishwas Mohan Bhatt, Ashok Pandey, Ghazi Khan and the Nizami brothers all flocked to the festival to give their specific renditions and earn immortal acclaim.

Among the dancers there are the likes of Surabhi Tandon the scion of the Lucknow Gharana of the dance form called Kathak; Radha Hindol’s soulful rendition of various nuances of Hindustani music brought the audiences into a trance where they felt at one almost with their Lord. All the experts of music and dance have visited the prestigious festival to make a name for themselves and their teachers and to immortalize the beautiful compositions that have been inspired by the Lord Krishna and his devoted groups of friends and kin. All of them give their best every year to make the musical festival a rich cultural treat for the doyens and the newer entrants alike.

A colorful personality, mischievous to boot, Lord Krishna’s Vrindavan too is a reflection of his many moods. The frocking about and making the Gopis angry with their antics the gopals are a sundry group of youthful boys and men who perform a number of lilting and vibrant dances to the typical tunes of Vrindavan area to relive the moments when Krishna himself reigned supreme in its many vales and meadows. Some of the festivals that carry forward the traditions of Nand Gopal Krishna are the many ways of performing in Holi over prolonged sessions during day and night. During the full moon day (Purnima) of Phalgun month (Feb-March) of Hindu calendar, people of Vrindavan are ecstatic with joy. They celebrate Holi or the festival of colors all over Vrindavan and particularly at Barsana, Dauji and Nandgaon. 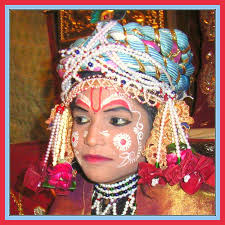 The festival of colors is just that – colors flying around in the air. Whether it is liquid colors poured from balconies and cornices or powered fragrant ‘gulal’ in resplendent magenta, indigo, red, yellow and green hues being thrown by the handful or even plateful into the atmosphere besides also being smeared on faces and heads of men, women and children as they dance about in joy to the tune of various musical instruments. A thick haze seems to cloud the townships as the entire atmosphere is fragrant and colorful. All people look equal. All barriers of caste, class and economic strata seem to melt away as the universal color of the Lord Krishna himself and his spiritual bonding seems to color every soul participating in the festivities. There is ‘thandai’ or a sweet milky drink for the parched throats at virtually every corner and a huge variety of sweetmeats on offer some being homemade and others procured locally, especially the ‘pedas’ made from milk.

Variations to Holi festivities are seen at Varsana where women, symbolizing the ‘Gopis’ take recompense for all the mischief the ‘gopals’ have perpetuated on them by hitting them with long bamboo shafts. This is usually a playful enacting of the day bygone but the boys and men carry shield to protect themselves nevertheless!

At Nandgram, or the parental home of Lord Krishna, the Holi festivities are carried forth a day after Holi has been played in Varsana. The symbolic carriage of the flag of the Larily Lala temple and its being ambushed and almost captured is the scenario enacted here while the men and women regale themselves once again with light banter and hitting the men with bamboo shafts as they protect themselves with their shields. 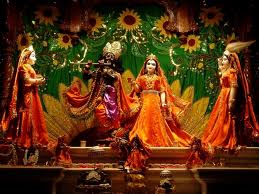 At Phalen the story of ‘Holika dahan’ or the burning of Holika, the sister of King Hrinyakashap is enacted. She had been given the boon that she would not be burnt by fire even if she sat in it. But she attempted to kill her nephew, Prahlad who was a great devotee of Lord Vishnu. Her boon was revoked and she was burnt to cinders while Prahlad, whom she had been holding in her lap, was unharmed. This event is celebrated to commemorate the symbolic dying away of evil and the triumph of good over the evil forces.

At Dauji or Baldo holi takes on a really virulent aspect because it is here that the entire fervor and wild aspects of the event come to the fore. The celebrations are symbolic of the energy of the youth and their innovativeness in participating in fun and frolic. During this event the boys climb up to to inaccessible ramparts to douse every passing woman or girl with large quantities of colored water while the girls and women too are pretty innovative in finding various ways to color their men folk.

Panchamrit or ‘Five Nectars’, the Prasad of Lord Krishna

Just as unique are the exploits and life of Lord Krishna so is the prasad given to devotees during the festivals and pujas at Vrindavan. This is the panchamrit or the prasad made from five nectars, These five components of the prasad are milk, curd or yoghurt, ‘desi ghee’ or clarified butter, honey and tulsi (Ocimum teneiflorum) leaves. This mixture is stir lightly and served to all the devotees. This Prasad is the essential part of the Vrindavan experience whilst all else is a function of the individuals capacity to becoming one with the plays of the Lord in his childhood home.

Comments / Discussion Board - Culture of Vrindavan