Before the protuberant Chattikara turn to Vrindavan civic commencing the freeway, packed with signposts, there is a minor somewhat overlooked turn into the village Chhatikara, which goes the great site of Garud Govind Temple. It is one of the oldest temples of Vrindavan located in Chhatikara village on NH2.  According to legend, the original deity was built thousands of years back by Vajranabh on the instructions of Garhacharya. It is believed that the temple was built where Garud, the carrier of Lord Vishnu offered his prayers to Vrindavan since he was not allowed inside the temple due to a curse. Lord Krishna also blessed Garud by offering a special dasrhan of Givind deva. The temple is the proud to have the deity of Lord Vishnu with 12 arms seated on his Garud along with Mahalakshmi. The most important ceremony of the temple is Kalsarp Anusthan. 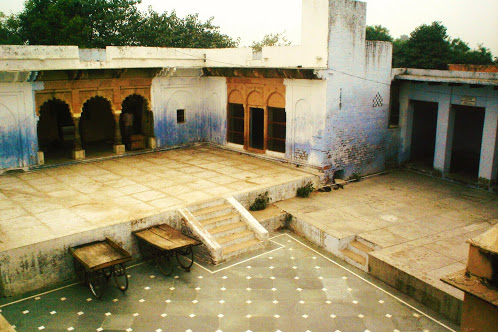 The historic Garud Govind temple is located in Vrindavan and has an exceptional beautiful statue of Krishna installed on a Garud (eagle). It takes us back to almost 5000 years. As per the mythology it says that the child Krishna was here and Chati Pujan ceremony was held here. One of the great lord’s friends would be the garuda and he would climb upon his shoulder.

Garudji bemused to see that noble Rama snarled in Naagpash by Meghnath. The doubt of Kaak-bhusundiji was cleared and his uncertainty and recommended him to go to this abode where young Krishna was playing. Garudji arrived here and proffered his expression of regret for the bafflement which he then had in Treta Yuga. Then Great Lord Krishna climbed upon Garudji. The other belief is that Sri Krishna gave his blessing to Kaliya the snake that within this place none of the snakes will ever have fear of the garuds. This is the reason as well why the Kaalsarp Pujan is also performed at the Garud Temple and not only from Vrindavan but people all over the country come here for this puja. This also has small water lake near the temple.

This is the old temple and as a holy place relates to the great Lord Krishna. There is also a statue of Maa Laxmi. It is also believed this was built by Vajranabh .The deity is of Lord Govinda on the back of the Garud and has total of twelve arms, so Lord Krishna is also called by the name of Garud Govind Ji.The great temple is rarest statue of the great Lord and is must see for all the devotees who come to Vrindavan the holy shrine and birth place of the Great Lord. 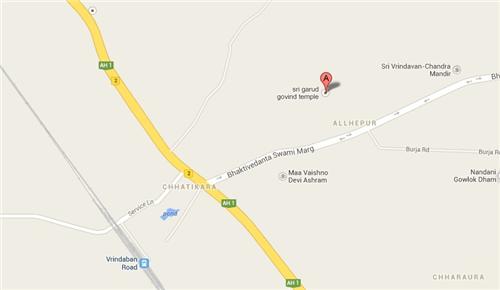 As per the Hindu mythology the Kalsarp Yog is a situation when the planets in an entity's horoscope, at the timings when he is born are located mid of the Rahu and Ketu. This makes an individual more negative and he develops core inferiority among others, depression is also a part of this. There is no good luck and fortune and negate all the happiness if the impact is too high.

Lord Krishna rides on the Garud, and Garud is the son of Aditi and Kashyap. He is also the younger brother of Indira. Garud's wing will echo sounds of vedas as he flies high in the sky. As per the heroic tales when Garud came out of his egg, he looked as if as a rampant firestorm alike to the planetary brushfire that guzzles the world at the end of every age. Startled, the gods supplicated him for kindness. Garud, hearing their request, reduced himself in size and dynamism.Garud theaters an imperative character in Krishna avatar in which Krishna and Satyabhama jaunt on Garud to slaughter Narakasura. On more juncture, Lord Hari jaunts on Garud to save the follower elephant whose name is the great Gajendra.

How to Reach Garud Govind Temple

Vrindavan is 54 km from Agra airport and in the center of Vrindavan Govardhan and Mathura is located the Garud Govind Temple in the Chhatikara village.