The town of Vrindavan in Mathura District of Uttar Pradesh is as relevant to Hindus of India as Krishna is to the great Indian epic, the Mahabharata. Its religious and mythological connotations are central to the worship of Krishna in the pantheon of Hindu gods. A precocious child, a trusted friend, a performer of miracles, a romantic lover and a saviour to all; Vrindavan is deeply associated with the life and times of Krishna and the tales woven around his life. 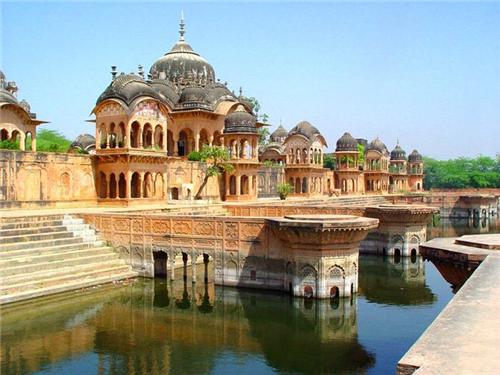 Vrindavan is located about 10 kilometres away from Mathura, on the Delhi-Agra National Highway. Mathura is Krishna’s birthplace and is one of the seven holy cities for Hindu pilgrimage but Vrindavan was the site of an ancient, dense forest where Krishna spent much of his youth and adult years. Vrindavan also finds mention in the Hindu epic Mahabharata.

Folklore and recorded evidence of Krishna’s life and his childhood shows us that he was raised in the village of Gokul near Vrindavan by his foster parents, Yashoda and Nanda. Vrindavan was the site of Krishna’s early childhood; the dense forests were ideal for him and his brother Balarama to play games and indulge in childhood pranks and pastimes with other children from Gokul. 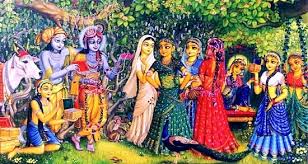 Vrindavan is specially known for Krishna’s humorous antics and pranks, his dalliances with village girls from Gokul known as Gopis and his romance with Radha, his lifetime companion which became the basis for the ‘bhaktiras’, the divine love between master and disciple. It is this divine love that bears relevance to Vrindavan and the manner in which it has grown over the past few centuries to not only becoming a place of worship for Krishna followers but also as a seat of learning of Vaishnavism. The famous Sanskrit poet, Jayadeva’s poem Gita Govinda is a compilation of the divine life of Krishna.

Origin of the name ‘Vrindavan’

‘Vrinda’ or Brinda refers to Tulsi or Holy Basil, the single most important i 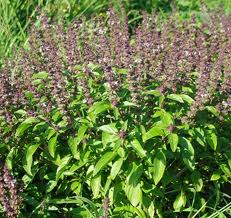 ngredient of all poojas or worship of the gods in Hinduism. The Tulsi leaves are offered in worship and garlands are strung to adorn the gods. ‘Vana’ is the Sanskrit word for forest; it is believed that Vrindavan was once abode to large, dense growths of the Tulsi plant, hence the name.

The modern town came into existence in the early 16th century, around one of the oldest surviving temples, the Govinda Dev temple, renowned for its stupendous architecture. Govind is another name, by which Krishna is referred to. Since the time of the Mahabharata and the famous Kurukshetra war, where Krishna held centre stage, Vrindavan fell into decline and lost its once pristine glory. Hinduism had by then been undergoing upheavals and revolutionary movements and it was not until Chaitanya Mahaprabhu, the singer-saint from West Bengal set out to re-discover Vrindavan, did the world hear once more of this once historic site.

The Bhagavata Purana, or ‘the eternal tales of the Supreme God’, one of the ancient Puranic Texts of Hinduism, is considered to be the purest and the greatest because it sings praises and invokes the name of Lord Vishnu and his various manifestations and incarnations. The earliest references of the oral traditions of Bhagavata Purana were made around 8th century in the Christian era or calendar. Krishna is considered the complete incarnation of Vishnu and the Bhagavata Purana includes the most comprehensive collection of tales and anecdotes about Krishna with particular reference to his time at Vrindavan. The various stages of human life that he took in the incarnation of Vishnu form the basis for the poems and songs that are sung by the devout in the belief that it will truly liberate them from the bonds of the material world and fill them with transcendental knowledge. 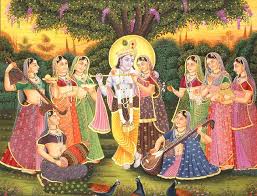 The rich heritage of Vrindavan has evolved from the mid 15th century, beginning as the place of worship of Krishna and growing into an important seat of Vaishnavism, one of the two important sects of Hinduism; Shivaism being the other. As the names suggest, Vaishnavism is the religious tenet followed by those who worship Vishnu, of whom Krishna is believed to be an avatar; Shivaism is for those who are followers of Shiva.

Vrindavan is dotted with many temples, filled with architectural beauty and elegance, all of which stand testimony to Krishna’s life and the roles he played as friend, lover, philosopher and guide.
Vrindavan’s tryst with modernity

In the last two and a half centuries, rapid urbanization has taken away much of the forests and glades that it was once famous for. The once dense and splendid forest cover with its varied wildlife, such as peacocks and rare birds has given way to modern buildings and complexes, many ashrams, resting houses and boarding places for the pilgrims who throng to the town every year. The peacocks have all but vanished but the cows and monkeys are very visible by their large presence in and around the town. Governmental committees are looking into ways and means of replenishing the green cover around Vrindavan with the help of locals and environmentalists.

Today, Vrindavan is home to a population of around 60,000 devout men and women who have chosen to spend their lives here singing praises of Krishna; in their intense bhakti or faith in Krishna, they have truly merged body and mind. It is also known as the ‘City of Widows’, home to thousands of widows and destitute women who have made Vrindavan their home after being disowned by their families. They spend all their time praying inside the temples and earning meagre incomes by singing bhajans on Krishna on auspicious days and events. These widows are today looking forward to a better life and future with the support of many NGOs who have taken up their cause.

Comments / Discussion Board - History of Vrindavan