Vrindavan well-known for its pilgrimage value for the Hindu religion is categorized as one of the most distinguished places which are very well-known for its religious tourism. Devotees who are into worshipping Lord Krishna and Radharani always make it a point to come and visit this calm and serene atmosphere of the city. All the courageous stories of Lord Krishna and Radharani that one has read all his life has only prevailed in this pilgrimage city. 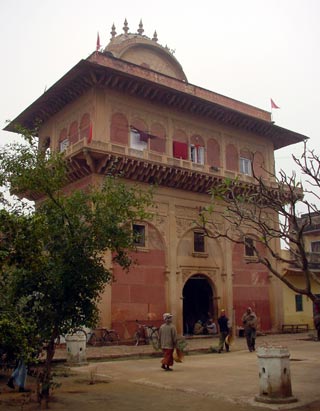 Located near the Mathura Road and very close to Tekari Rani ghat near the banks of the river Yamuna, Tekari Rani temple needs no introduction. It was built by the Queen of Tekari. It indeed is one of the finest monuments in Vrindavan which were built into Rajasthani architecture. The legend has it that it 200 years ago when the Queen of Tekari was on her way to visit Vrindavan she was attacked by some dacoits who wanted to rob her of her belongings.

She ran away protecting her beloved deity of Gopal along the banks of Yamuna River and managed safely to reach the other side of the river. It is this place where the Tekari Rani temple has been built for over 150 years now.

The temple complex built is vast and immensely extraordinary. There also exists a palace near to the temple which is surrounded by women’s quarters. There exist many appealing gardens of various trees along with a dazzling hall with deities of Lord Krishna and Radharani. 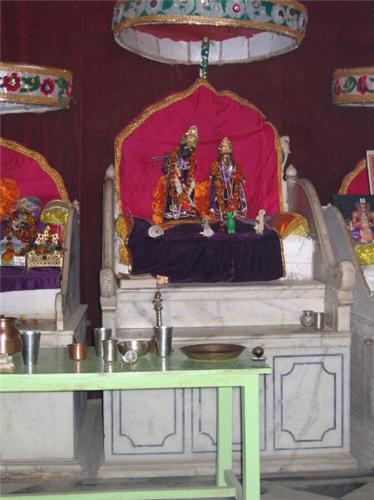 The temple has been segregated in various altars. The center altar owns a huge sculpture of Radharani along with Lord Krishna.

At the time of the evening, the temple exhibits a different aura altogether, it is indeed a delight to watch the sight of the temple after the start of the prayers. At 4o'clock in the morning one can hear the mangal aarti enchantments after which the temple immediately gets filled with the joyous air. The temple schedule goes from early morning till the evening aarti.


Not many options are available to stay in Vrindavan but some of the prominent hotels of the city can be found in the adjacent areas of the temple. Accommodation can also be made available in Teka Rani temple guest house itself where one can rent out budget rooms. There are many guest rooms in the vicinity of the temple complex. The food is also available inside the premises.

However, one can also look out for rooms in Mathura, stay there and can travel to Vrindavan on a daily basis since it will be much cheaper as compared to renting out rooms in the city of Vrindavan. Teka Rani temple keeps hosting various programs during the months of Kartika (October-November) which can be termed as the best time to pay a visit to the temple.

One can travel via air or train to visit Tekari Rani Mandir. The nearest airport which is the Agra Airport is about at an hour’s distance from Vrindavan, from where an individual can easily arrange a taxi or a bus to reach the temple. If a devotee is commuting via train then he needs to reach Chhata Train Station or the Bharatpur Station (26 and 42 kilometers away ). It will take almost 40-50 minutes from reaching the place by an auto rickshaw or by bus which can be found outside the railway station.